From Montaigne 1.20 – That to Philosophize is to Learn to Die:

It is enough for me to spend my time contentedly. I deal myself the best hand I can, and then accept it. It can be as inglorious or as unexemplary as you please:

Prætulerim delirus inersque videri,
Dum mea delectent mala me, vel denique fallant,
Quam sapere et ringi.
[I would rather be delirious or a dullard if my faults pleased me, or at least deceived me, rather than to be wise and snarling.]

I always hear an echo of this passage in a favorite line from Moby Dick’s opening chapter – I guess Melville would’ve had the Cotton translation or, less likely, the Florio.

I abandon the glory and distinction of such offices to those who like them. For my part, I abominate all honorable respectable toils, trials, and tribulations of every kind whatsoever. It is quite as much as I can do to take care of myself

From Montaigne’s Essays 1.19 – That We Should Not Be Deemed Happy Until After Our Death

So it seems likely to me that [Solon] was … intending to tell us that happiness in life (depending as it does on the tranquillity and contentment of a spirit well-born and on the resolution and assurance of an ordered soul) may never be attributed to any man until we have seen him act out the last scene in his play, which is indubitably the hardest.10 In all the rest he can wear an actor’s mask: those fine philosophical arguments may be only a pose, or whatever else befalls us may not assay us to the quick, allowing us to keep our countenance serene. But in that last scene played between death and ourself there is no more feigning; we must speak straightforward French; we must show whatever is good and clean in the bottom of the pot:

Nam veræ voces tum demum pectore ab into
Ejiciuntur, et eripitur persona, manet res
[Only then are true words uttered from deep in our breast. The mask is ripped off: reality remains.]

That is why all the other actions in our life must be tried on the touchstone of this final deed. It is the Master-day, the day which judges all the others; it is (says one of the Ancients) the day which must judge all my years now past. The assay of the fruits of my studies is postponed unto death. Then we shall see if my arguments come from my lips or my heart.

The two lines are Lucretius, III, 57.

For my part, who as much as I can endeavour to reduce the ceremonies of my house, I very often forget both the one and the other of these vain offices [of receiving and seeing off guests]. If, peradventure, some one may take offence at this, I can’t help it; it is much better to offend him once than myself every day, for it would be a perpetual slavery.

From Montaigne’s Essais 1.6, L’Heure des Parlemens Dangereuse / The Hour of Parley is Dangerous:

And nobler still was the answer made by Alexander the Great to Polypercon, who was urging him one night to take advantage of the darkness to launch an attack against Darius: ‘Certainly not. I am not the man to thieve a victory and then follow it up!’

‘Malo me fortunae poeniteat, quam victoriae pudeat.’
I would rather complain of Fortune than feel ashamed of victory.

The story is taken from Quintus Curtius’ History of Alexander (4.13) where Alexander adds the additional argument, (carefully?) omitted by Montaigne, that the plan wouldn’t work anyway.

Almost all agreed with Parmenion [whose plan was to attack at night]; Polypercon thought that victory undoubtedly depended upon that plan. Alexander, looking solemnly at the latter—for he had lately chided Parmenion more severely than he wished and did not have the heart to upbraid him again—said: “The craft which you recommend to me is that of petty robbers and thieves; for their sole desire is to deceive. I will not suffer my glory always to be impaired by the absence of Darius, or by confined places, or by deceit by night. I am determined to attack openly by daylight; I prefer to regret my fortune rather than be ashamed of my victory. Besides, this consideration too is added; I am well aware that the barbarians keep watch by night and stand under arms, so that it is not really possible to deceive them. Therefore do you prepare for battle.” When they had been thus aroused, he bade them take food and rest.

A gentleman of ours who is terribly subject to gout would answer his doctors quite amusingly when asked to give up salted meats entirely. He would say that he liked to have something to blame when tortured by the onslaughts of that illness: the more he yelled out curses against sausage, beef tongue, and ham, the more relief he felt.

From Montaigne’s Nos affections s’emportent au delà de nous – Our emotions are carried beyond us.

We are never ‘at home’: we are always outside ourselves. Fear, desire, hope, impel us towards the future; they rob us of feelings and concern for what now is, in order to spend time over what will be – even when we ourselves shall be no more. [C] ‘Calamitosus est animus futuri anxius’ [Wretched is a mind anxious about the future].

The latin is from Seneca letter 98.

…. the account goes on to tell us that Cambyses asked [Psammenitus] why he had remained unmoved by the fate of his son and daughter yet showed such emotion at the death of his friend. ‘Only the last of these misfortunes can be expressed by tears’, he replied; ‘the first two are way beyond any means of expression.’

That may explain the solution adopted by a painter in antiquity. He had to portray the grief shown on the faces of the people who were present when Iphigenia was sacrificed, giving each of them the degree of sorrow appropriate to his feelings of involvement in the death of that fair and innocent young woman. By the time he came to portray the father of Iphigenia he had exhausted all the resources of his art, so he painted him with his face veiled over, as though no countenance could display a grief so intense.

The painter is Timanthes (4th century B.C) and the painting described is mentioned several times in Roman sources.

To return to Timanthes—he had a very high degree of genius. Orators have sung the praises of his Iphigenia, who stands at the altar awaiting her doom; the artist has shown all present full of sorrow, and especially her uncle, and has exhausted all the indications of grief, yet has veiled the countenance of her father himself. whom he was unable adequately to portray. There are also other examples of his genius, for instance a quite small panel of a Sleeping Cyclops, whose gigantic stature he aimed at representing even on that scale by painting at his side some Satyrs measuring the size of his thumb with a wand. Indeed Timanthes is the only artist in whose works more is always implied than is depicted, and whose execution, though consummate, is always surpassed by his genius.

the poet avoids impropriety as the greatest fault which he can commit; he errs also if he puts the speech of a good man in the mouth of a villain, or that of a wise man in the mouth of a fool; so also the painter in portraying the sacrifice of Iphigenia, after representing Calchas as sad, Ulysses as still more so, Menelaus as in grief, felt that Agamemnon’s head must be veiled

The below fresco from Pompeii is sometimes thought to be a Roman copy of Timanthes’ work – though it would seem necessary to take copy in a somewhat loose sense.  Iphigenia is not standing at an altar as Pliny states and, Agamemnon excepted, I can’t match any of the figures with the emotions he or Cicero describe as so manifestly present. 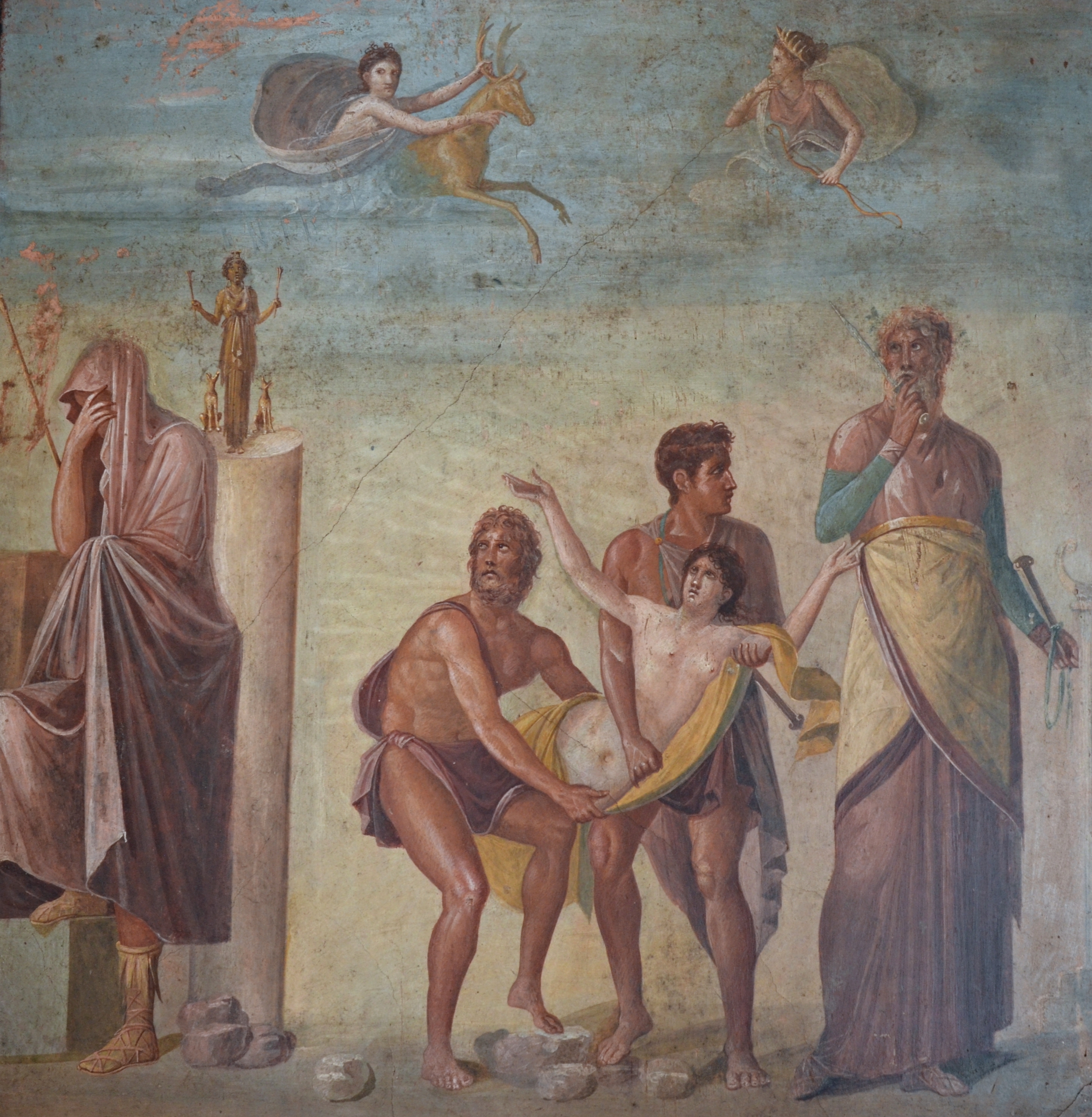 From Montaigne’s Essai 1.1 Par Divers Moyens On Arrive à Pareille Fin (By different means one arrives at the same end).

Certainly he is a subject marvellously vain, diverse, and undulating – man.  It is not easy to found a steady and unchanging judgment on him.

There’s nothing remarkable in the sentiment but the word choice is so beautifully Montaigne and so good an instance of one of Proust’s insights into style:

So it is with all great writers: the beauty of their sentences is as unforeseeable as is that of a woman whom we have never seen; it is creative, because it is applied to an external object which they have thought of—as opposed to thinking about themselves—and to which they have not yet given expression. An author of memoirs of our time, wishing to write without too obviously seeming to be writing like Saint-Simon, might at a pinch give us the first line of his portrait of Villars: “He was a rather tall man, dark . . . with an alert, open, expressive physiognomy,” but what law of determinism could bring him to the discovery of Saint-Simon’s next line, which begins with “and, to tell the truth, a trifle mad”? The true variety is in this abundance of real and unexpected elements, in the branch loaded with blue flowers which shoots up, against all reason, from the spring hedgerow that seemed already overcharged with blossoms, whereas the purely formal imitation of variety (and one might advance the same argument for all the other qualities of style) is but a barren uniformity, that is to say the very antithesis of variety, and cannot, in the work of imitators, give the illusion or recall the memory of it save to a reader who has not acquired the sense of it from the masters themselves.

In one of my often pricey midnight impulses a few weeks back I almost bought a three volume facsimile edition of the hand-annotated Bordeaux edition of Montaigne’s Essais.  There is a likely nicer single volume color edition printed in 2002 that I have never been able to find, while this is a 1987 black and white photostat copy printed by Slatkine.  Fortunately I exercised restraint and found a library willing to send me their copy for a bit.  It’s fascinating as insight into his revision process but – like my Proust facsimile –  impossible to read and, for general purposes, unnecessary next to the Pleiade edition that works (most of) his changes into the body of the text or the notes and variants section of the edition.

No one is free from speaking bits of nonsense – the misfortune is in making an effort to say them:

Yes, that one with a great effort has said a great nothing

That doesn’t touch me; mine flow from me with as little conscious attention as they’re worth.

“It will be seen that this mere painstaking burrower and grub-worm of a poor devil of a Sub-Sub appears to have gone through the long Vaticans and street-stalls of the earth, picking up whatever random curiosities he could anyways find in any book whatsoever, sacred or profane” – prologue to Moby Dick